Golden Knights Fans Skate Through Retirement at One Las Vegas 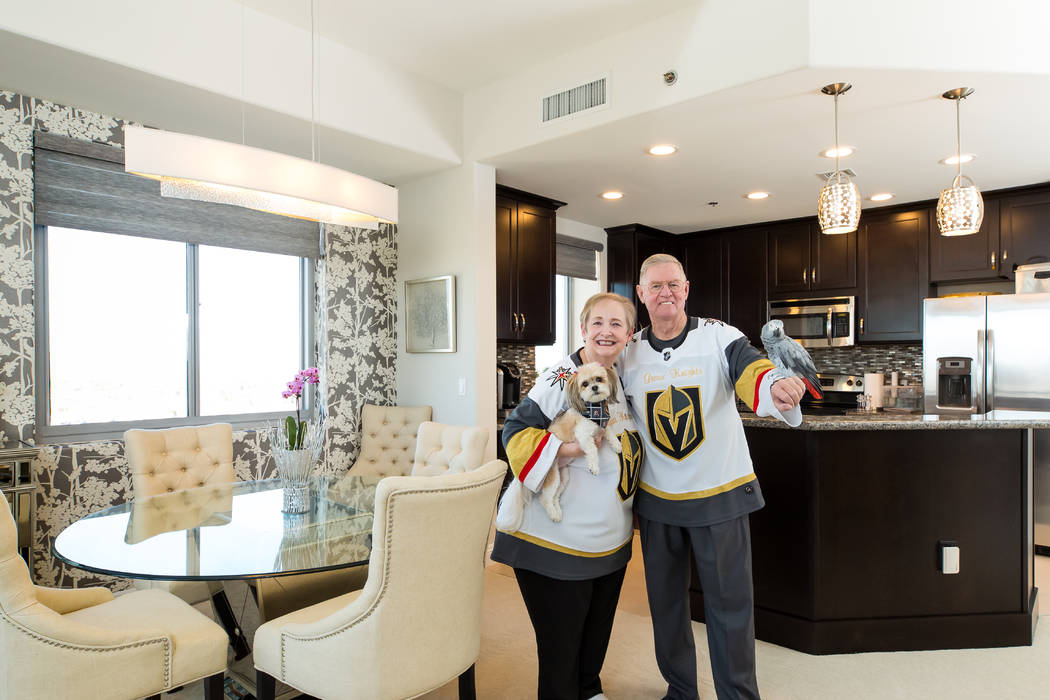 Baton Rouge, Louisiana, natives and avid Vegas Golden Knights fans Gerald and Janice Pellar were no strangers to Las Vegas when they began exploring possible cities for their high-energy and fun-filled retirement lifestyle.

Frequent visitors to the city since 1975, the couple knew Las Vegas offered everything they wanted. Once the decision was made, all they had to do was find a home that fit their lifestyle.

The couple looked at single-family homes, but after choosing to leave behind the time-zapping duties of home upkeep, they zeroed in on maintenance-free, high-rise living. The Pellars carefully evaluated several high-rises condominium communities in and around Las Vegas.

“Over the years while visiting Las Vegas, we watched these beautiful towers being built on the south Strip,” Gerald Pellar said.

So naturally, One Las Vegas was on their list of possible future homes for the couple to view.

“There was something different about One Las Vegas from the moment we walked in,” Janice Pellar said. “We knew this was it.”

Before making a final decision, the couple rented a One Las Vegas two-bedroom, 2½-bath condominium home for a year. The experience persuaded them to buy the same floor plan but as a corner unit.

“The views are amazing. Coming from Baton Rouge where it’s very flat, just to sit on our terrace with both sunrise and sunset views of the mountains, not to mention the spectacular view of the Strip, is an incredibly enjoyable experience,” Janice Pellar said. The couple share their home with their 6-pound dog and a bird whose cage is strategically positioned by the floor-to-ceiling windows, where she gets plenty of natural light. “I think she loves the view more than anyone.”

Gerald and Janice Pellar split their time between Las Vegas and their town house in Baton Rouge, where the couple spent most of their 43-year marriage and owned and operated a successful national electronics-communications company.

“We now spend about nine months here and three months in Baton Rouge,” Gerald Pellar said. “When we do leave, it’s great to lock the door and leave knowing we can depend on the concierge and maintenance team to handle anything that might come up.”

I can’t say enough about the concierge team,” Janice Pellar said. They are amazingly helpful, especially the cleaning service.”

First and foremost, the couple appreciate the sense of security at One Las Vegas.

“Safety was a very important part our decision to purchase at One Las Vegas. We always feel safe here and know that our home is secure when we leave.”

The one time of year the Pellars won’t leave town is during hockey season. Avid hockey fans, the couple passionately embraced the Golden Knights even before the team’s first game.

“We’ve been there from the beginning,” Gerald Pellar said. “We have season tickets and wouldn’t think of missing a game. It’s great that One Las Vegas is so close to T-Mobile Arena.”

And even though their NFL allegiance is with the Saints, the couple look forward to the opening of Allegiant Stadium, the soon-to-be home of the Raiders, just five minutes from their home.

Gerald Pellar straps on his skates (roller and ice) at least three times a week as a member of a Las Vegas over-60 skating group.

“He has to be in good shape to keep up his skating activities,” Janice Pellar said. “It’s one reason he loves the on-site, state-of-the-art fitness center.

Appreciating One Las Vegas’ location on Las Vegas Boulevard South, Janice Pellar tells friends: “We like to say we live on the Strip not ‘in’ the Strip. It’s nice that the high-energy Strip is extremely accessible, but some days you just feel like running to the neighborhood restaurant across the street.”

Enjoying all entertainment options Las Vegas offers, Gerald and Janice Pellar enjoy the easy access to such venues as The Smith Center for Performing Arts, which they frequent.

“There’s always something different to do in Las Vegas,” Janice Pellar said. “It’s the symphony one night, National Finals Rodeo on another day and jazz the next. We couldn’t be happier with our move to Las Vegas and our One Las Vegas lifestyle.”