Las Vegas is known for its fine dining options, gambling of all kinds, entertainment and nightlife, and, of course, all the beautiful lights. But have you ever stopped to really think about the buildings that house all these amazing activities? Have you really looked at one of the buildings on the Strip or in Downtown, and thought about the architecture that went into creating this beautiful building?

One Las Vegas is here to take you through the world of architecture in Las Vegas, including everything from mid-century modern to historic to cutting-edge design. Without the hard work and attention to detail that went into some of the most beautiful Las Vegas buildings, the desert wouldn’t be nearly as interesting!

When looking at the Strip, you might notice that Las Vegas has replicated some of the signature structures of other cities such as Paris, New York, and Venice. But, beyond this replication and the lights of the city, you can tell that Las Vegas has created its own story and architectural wonders. Starting as just a small desert city and turning into what it is today, Las Vegas has a growth story like no other.

Located on Fremont Street, near the Fremont East Entertainment District, you’ll find Atomic Liquors. Making a huge impact on Vegas history, Atomic Liquors was constructed in 1945 and was the first location with a packaged liquor license in all of Las Vegas. The name of this location came about in 1952 when the owners would hold rooftop watch parties for the atomic bomb testing put on at the Nevada Testing Grounds. To this day, Atomic Liquors still sits in its original location on Fremont Street. However, a remodel of the building was conducted in 2012 to return Atomic Liquors back to its original glory and style. Stop by today to see how they pay tribute to the building’s original owners.

Another famous piece of architecture that can be found in Downtown Las Vegas is the Neon Museum. The concrete building and its unique curves were created by Paul Revere Williams in 1961. This statement building was first opened as a lodging location named La Concha Motel. Originally used as a lobby for the motel, the Neon Museum building was inspired by Southern California Googie architecture, described as cheap, modern, flashy, and where “form does not follow function”. When first presented with this project, Williams wanted this motel to be a memorable architectural sign and something that would set his hostelry apart from all the rest. The building sits in the same location today and guests can marvel at both the historic Las Vegas signs and the work of Williams himself. 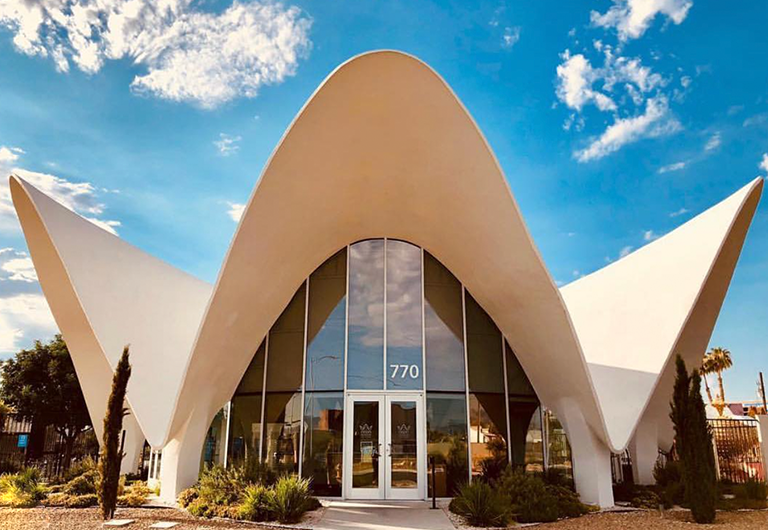 Although Taylor was not a well-known architect, he made a huge impact on the community and started a big discovery for Vegas architecture. Not only was Taylor inducted into UNLV’s Nevada Entertainer/Artist Hall of Fame in 2016, but the Nevada Preservation Foundation has also established the Hugh E. Taylor Archives which features drawings and photographs of his work.

Another famous and historic piece of architecture by Paul Revere Williams is the Guardian Angel Cathedral, developed in 1961 on land donated by the gangster and casino owner Moe Dalitz, otherwise known as Mr. Las Vegas. When Williams began to work on this unique building, he decided to go with an A-Frame design, giving the church muralist a triangle canvas to paint the Guardian Angel on the outside of the building.

You can still find the Guardian Angel Cathedral sitting close to the Strip, at 302 Cathedral Way. Not only is this amazing piece of architecture still standing, but it also offers full service masses for all to attend. 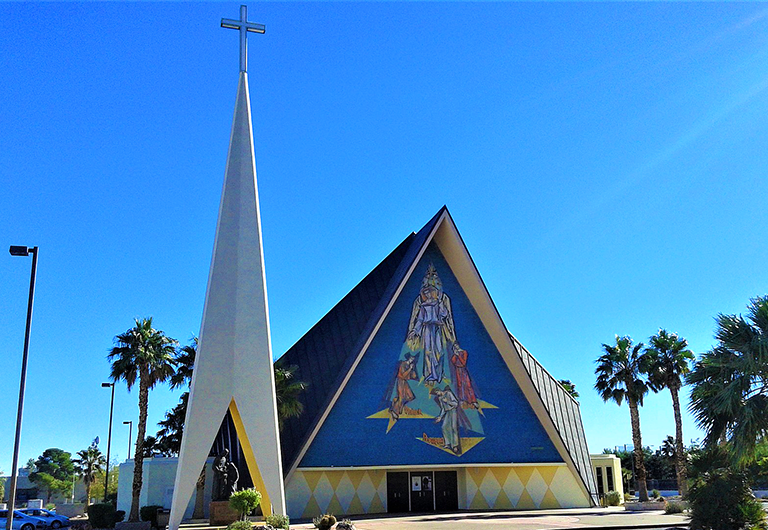 Below are some of the most cutting-edge designs in Las Vegas that give desert architecture a whole new meaning. Take note as you walk down the Las Vegas Strip, and take in all the beauty!

Reaching 61 stories into the Las Vegas sky is ARIA Resort & Casino. Developed and designed by the New Haven, Connecticut firm of Pelli Clarke Pelli Architects, ARIA is one of the “smaller” developments by the company. In addition to ARIA, the company has also developed and designed structures in New York, Malaysia, London, and Hong Kong.

The design of ARIA can only be described one way: modern, sleek, sophisticated, and contemporary. Not only does this Las Vegas Strip hotel offer entertainment and a true Vegas experience for its guests, but it also gives the Las Vegas skyline the additional beauty that it deserves. In addition to a modern design, ARIA is one of the first Vegas resorts to achieve the LEED Gold certification by the U.S. Green Building Council.

6. The Smith Center for the Performing Arts

Built between the years 2009 and 2012 by David M. Schwarz, DMSAS, The Smith Center for the Performing Arts is a world-class arts center for talent and beauty from the artists that perform on stage and the architects who created the outside. When designing this one-of-a-kind center, Schwarz was looking for a style that was indigenous to Las Vegas and also represented the history of the city well. To gain this look, Schwarz used the Hoover Dam as his inspiration, spreading the detailing of the Dam throughout Symphony Park.

In addition to the beautiful structure of the outside, the inside of The Smith Center houses three key performance spaces, filled with seating, levels, and beautiful detail to design consisting of Italian marble, Indiana limestone, and Venetian marble and zebrawood. So next time you’re looking for beautiful architecture in Las Vegas, check out the upcoming events at The Smith Center! 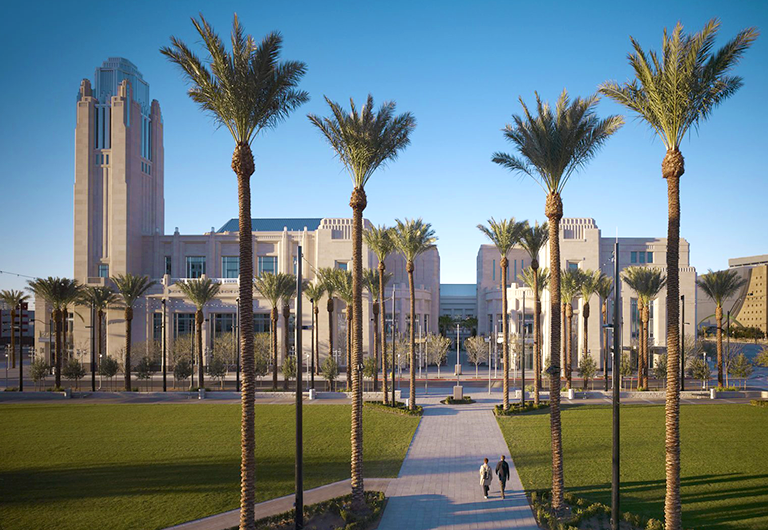 Located near the South end of the Strip, and close to your home at One Las Vegas, sits the Luxor Hotel & Casino Las Vegas pyramid. Designed by architect Veldon Simpson, the Luxor was intended to be a postmodernist piece of architecture. The pyramid contains more than 4,000 hotel rooms, a 110 foot tall replica of the Great Sphinx of Giza, and a light beam on top that can be seen from 300 miles away (which is the strongest in the world).

This Las Vegas building was originally built by Circus Circus Enterprises and completed in just 18 months. Not only did they use reinforced concrete to secure the building, but the top of the pyramid contains a steel skeleton to support the entire structure. If that wasn’t impressive enough, the Luxor Hotel & Casino is the 3rd largest hotel in Las Vegas, the tallest pyramid in the U.S., and the 4th tallest pyramid in the world!

Now that you have a better understanding of the history of the most amazing buildings that make up this city, it’s time to get out there and start looking for yourself. In addition to the architecture structures mentioned above, there are a variety of hotels, residential communities, venues, and more that make up the skyline of our city. Some examples are:

As mentioned in Pop Up City, “Vegas has mastered the idea of reinvention, as over and over again the city found new ways of staying fresh, of transforming itself. It became the implosion capital as its developers got rid of the old and invented something new.”

Enjoy the beauty of some of the most unique buildings because Las Vegas architecture is one-of-a-kind.