Record condo sale in a record year for high-rise market 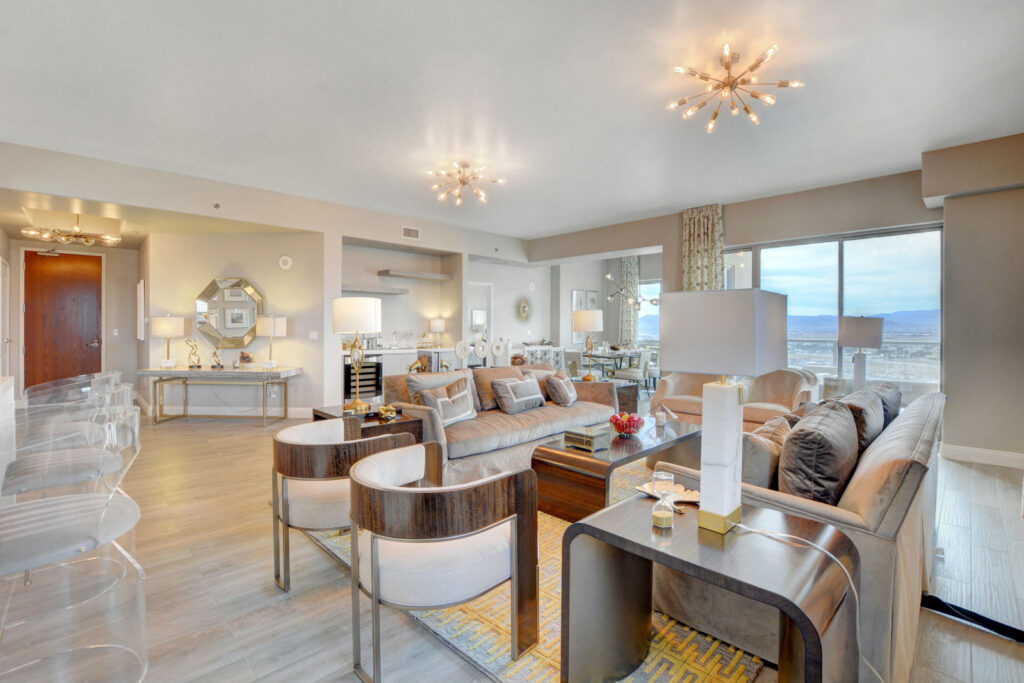 In what’s likely to be a record-breaking year in the existing high-rise condominium market, it’s only fitting that Las Vegas set a record for the highest price ever paid for a condo at $16.25 million.

The record comes as Trump Las Vegas made national news in an Associated Press story about sales and prices at the condo-hotel tower that opened in 2008. The story talked about a nationwide trend of dropping prices for Trump units.

The record sale at The Martin, one of the three-tower complex known as Panorama Towers and unit profiled by Real Estate Millions in February, blew away the previous record at the Palms rooftop bachelor pad owned by Phil Maloof. That unit that covers the entire 58th floor sold for $12.5 million in 2019.

The buyer of the unit remains a mystery, as is the seller, with both listed under anonymous entities. The buyer is listed under Nev Property One LLC, which was formed May 17, according to the Nevada secretary of state’s office.

One of LLC’s managers, Neal Griffith, is the managing director of the Maybridge Group, a wealth management company based in Barbados.

The buyer’s Realtors are Christian Carrillo and Jazhiel Lopez with Signature Real Estate. Carrillo said the buyers have declined to comment, and he could not provide any more details about the acquisition.

“The type of buyer who buys something like that is someone very independently wealthy and often they collect real estate like they do art,” said Ken Lowman, owner of Luxury Homes of Las Vegas. “It’s their fourth-, fifth- or sixth-home type of buyers. They will come to Vegas and maybe use it six or eight weeks out of the year and be in various other locations worldwide in the meantime.”

Lowman said that won’t be the last time a sale of that magnitude is reached in the high-rise segment given the hot market.

“I think we will end up breaking that record within six to 12 months,” Lowman said. “There are a handful of units out there, and some of them are being quietly shopped around.”

The unnamed seller of the unit has homes in other countries. He bought it as a gray shell for $4.25 million in 2016 and spent about $12 million to $13 million renovating it, according to listing agent Michael McGraw of Elite Realty.

McGraw said the unit is one of the largest single-floor penthouses in the country. It is a little less than 13,000 square feet, plus an additional 2,000 square feet of balcony and outdoor space with 360-degree views of the valley. The walls are glass and provide views from the inside.

There are two master bedrooms, one on each end of the penthouse. In addition, there are three other bedrooms, seven bathrooms, a catering kitchen, theater and a gym with $250,000 in equipment. There’s also a steam room, sauna and stainless steel cold plunge. The unit also has a private wine room, bar and game room. On the exotic side, it has a 12-foot, 800-gallon saltwater fish tank and rock, fossil and mineral collection valued at more than $1 million. The fish tank is circular with a bed in the middle where you can watch the fish swim around, McGraw said.

The sale is a reflection of quite a turnaround for the high-rise market since the calendar turned to 2021. Sales of high-rise units in 21 properties fell 17 percent in 2020 compared with 2019, according to research firm Applied Analysis.

Forrest Barbee, the corporate broker for Berkshire Hathaway HomeServices, Nevada Properties, reported the third straight month of sales surpassing 100 for condos in buildings five stories and above. There were 102 sales in May after 130 in April and 110 in March, Barbee reported.

The upward trend started in December, when there were 77 sales, the most since October 2018.

“There’s a confidence here that we haven’t had before,” Barbee said. “It seems like money is moving away from other markets and away from the stock market and into real estate. It’s like when people chase the stock market. They can’t get enough. The luxury condo market is back.”

Las Vegas residents aren’t natural high-rise dwellers, Barbee said. But there are people around the world who value high-rise condo dwelling and embrace it, he added.

Luxury sales of $1 million also stood out in the first four months of 2021, Barbee said. There were 45 such sales this year, which far surpasses previous years to this point, especially 2020, when there were 16 of $1 million and above through the end of May. Last year ended with 50 such luxury sales, Barbee said.

“A lot of the people attracted to Las Vegas right now are coming from other states and cities, and a lot of times the high-rise product is something they are more used to and more appealing to them,” Lowman said. 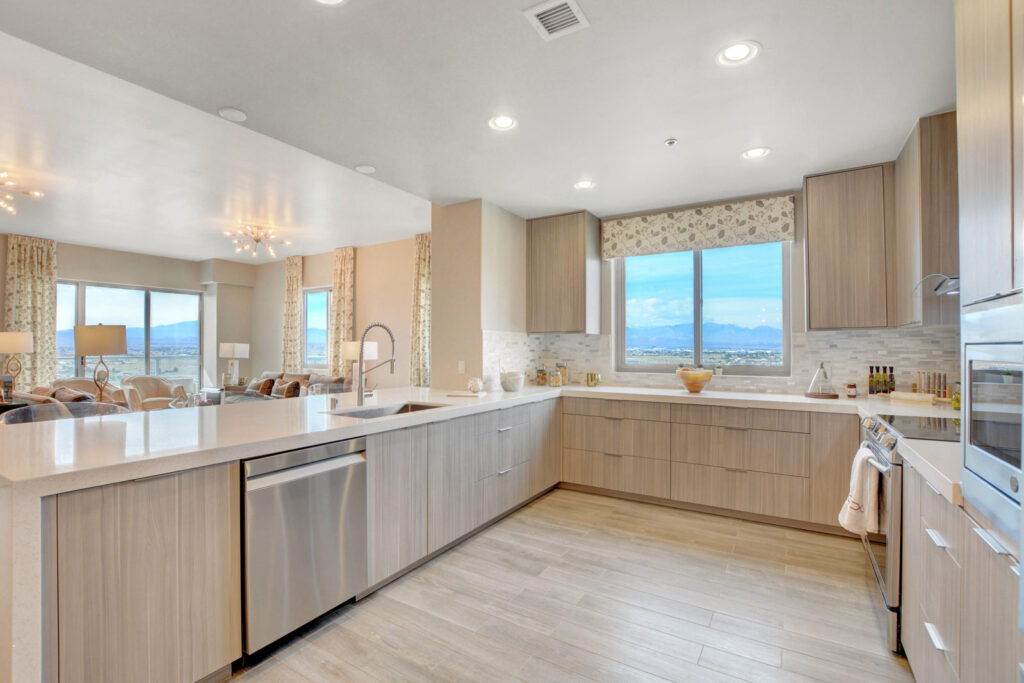 Lowman said there was resistance to buying high-rise codos in 2020 because of COVID-19 and people not wanting to be in high-density environments. With vaccinations and fewer infections, that scare has eased, he said.

“I have been selling real estate for 31 years, and this is the No. 1 best luxury market I have been in, and it looks like it is going to continue,” Lowman said of both the luxury condo and home segment.

MJ Blunk, a luxury Realtor with eXP Realty, said she even sees the condo market expanding with people coming in from outside Las Vegas. Units are spending fewer days on the market, she said.

“People that were on the sidelines because they were afraid are listing them,” Blunk said. “It was lagging single-family, but this is exciting for Las Vegas. Finally, the luxury condo market has caught up with single-family homes.”

Blunk said the reopening of Las Vegas to 100 percent and tourists coming back is getting a lot of worldwide attention and now word of the record-breaking sale has gotten out there as well.

“It’s only going to bring more people into Las Vegas to spend money because they know we have luxury properties that can command that kind of money,” Blunk said. “The opening of Resorts World (this month) is getting us worldwide attention.”

“People ask when is it going to slow down and the bubble is going to burst. The high-rise condo market has just started to accelerate, and that’s going to go on for a long time.”

Uri Vaknin, a principal at KRE Capital, investors that bought One Las Vegas in South Las Vegas Boulevard and Juhl condo towers in downtown, said they have 16 remaining units at One Las Vegas and 150 at Juhl. In the past three months, they’ve done 26 deals at Juhl and five deals are on the table.

The buyers at One Las Vegas were more impacted by the pandemic because they’re people coming out of larger homes. Since vaccinations started and California has reopened, sales have “snapped back overnight,” Vaknin said. At One Las Vegas, four are under contract and eight have closed in 2021, and there have been other resales in the building, too, he said.

“I think people want to be back in Vegas,” Vaknin said. “I don’t think people want to be socially distanced. Forty percent of our buyers are from other markets, and during the pandemic they were looking for single-family houses. That isn’t what they wanted. They wanted a fabulous condo in Las Vegas because they want to enjoy the lifestyle the city has to offer and not take care of a yard or house.”

Trump has since added 14 closings so far in the second quarter through May, bringing the yearly total to 34, Applied Analysis reported.

Trump is a condo-hotel in which most units are owned by people who put them in the hotel rental pool. There are some, however, used as residences.

Some Realtors speculated that the boost in sales may be connected to the political landscape. If owners of units perceive the value is tarnished by President Donald Trump’s brand, they may have lowered prices to get sales, Realtors suggested.

Since the Real Estate Millions story citing Trump Las Vegas ran in May, The Associated Press has tackled the issue of similar occurrences at Trump condos across the country, saying many are selling at deep discounts to bargain hunters.

The story was an Associated Press review of more than 4,000 transactions over the past 15 years in 11 Trump-branded buildings in Chicago, Honolulu, Las Vegas and New York and found prices for some condos and hotel rooms available for purchase have dropped by one-third or more.

That’s a plunge that outpaces drops in many similar buildings, leaving units for sale in Trump buildings to be had for hundreds of thousands to up to a million dollars less than they would have gone for years ago, the Associated Press reported.

“They’re giving them away,” says Lane Blue, who paid $160,500 in March for a studio in Trump’s Las Vegas tower, $350,000 less than the seller paid in 2008. It was his second purchase in the building this year and may not be his last, according to The Associated Press.

The story went on to say just how much the Trump name is to blame is impossible to say. Many units for sale are in cities that were hit hard by the pandemic or in hotels that had to shut down or in condo buildings much older than their competitors, making comparisons difficult, the report said.

The story said that when Trump was accused of whipping up the mob that stormed the Capitol on Jan. 6, things got really bad. Banks vowed not to lend to him, the PGA canceled a tournament at his New Jersey golf course, and New York City fired him as manager of a public course in the Bronx. Several brokers say many potential buyers won’t even look at Trump buildings now, according to The Associated Press.

The AP story even quoted Barbee on how prices at Trump’s hotel in Las Vegas have fallen 4 percent since he took office, while average prices for three dozen other hotels in the city that also sell condominiums and rooms rose 14 percent. Since the Trump building in Las Vegas opened in 2008, prices per square foot have fallen 66 percent, the story said.

The article said Las Vegas buyer Blue, who runs an air freight company in California, said he doesn’t care. He calls Trump “one of the greatest presidents ever” and thinks anger directed at him will blow over.

“Stuff washes out. People forget. People move on,” he told the AP.

Barbee said what’s happening to Trump Las Vegas, which is a condo-hotel and not a condo or apartment building, “is more complicated” than what’s happening in other markets. There’s been a lot of activity in the north end of the Strip with road construction and building of Resorts World Las Vegas, he said. The tower lost business meetings during the pandemic, he said.

“It’s a lot more than just the name,” Barbee said.