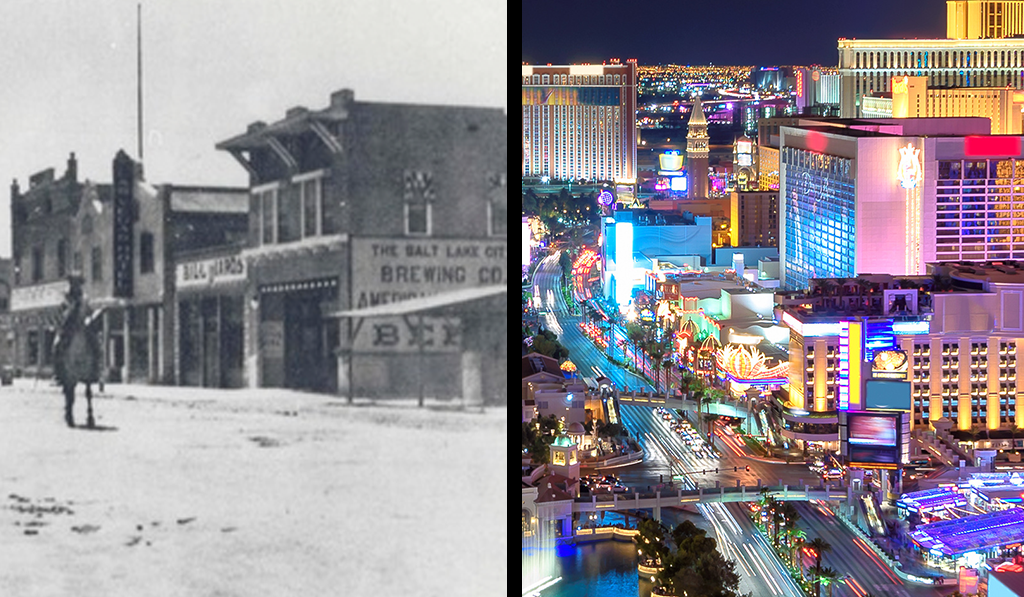 While Las Vegas may be widely known for its vibrant nightlife, 24-hour luxurious casinos and overindulgence, its true history runs deep. Las Vegas has come a long way from its humble beginnings and is now the buzzing metropolis that we know and love today. In just a century, Las Vegas has drawn millions of visitors and trillions of dollars in wealth to southern Nevada.

Take walk down memory lane as we look at the development of Las Vegas and how Las Vegas has changed over the years.

Las Vegas roots run deep. Evidence of prehistoric life in southern Nevada was discovered when the remains of a Columbian mammoth were found by construction workers in 1993.  The discovery of canyon petroglyphs and pictographs also attest to human presence for more than 10,000 years and members of the Paiute tribe migrated to the area as early as A.D. 700. In 1821, Rafael Rivera, a member of the Antonio Armijo trading party, stopped for water on the Old Spanish Trail from New Mexico on his way to Los Angeles.  At that time, several parts of the valley contained artesian wells surrounded by expansive green areas. The flows from the wells fed the Las Vegas Wash, which runs to the Colorado River. Because of this, he named the area Las Vegas, spanish for “the meadows”.

Not much changed in the Las Vegas valley after the United States took control of the land from Mexico in 1848. In 1855, Brigham Young sent a group of Mormon settlers to the area. While the settlement was unsuccessful, it was eventually taken over by Octavius Gass, who named the area the “Los Vegas Rancho”.

The Birth of Las Vegas

1905 – 1911 – The San Pedro, Los Angeles and Salt Lake railroad was completed in Las Vegas in 1905, connecting the city with the Pacific Ocean and the rest of the country’s main rail networks. The future downtown was auctioned by railroad company backers, and Las Vegas was officially incorporated in 1911. Nevada was the last western state to outlaw gambling in 1910, but it continued in speakeasies and illegal casinos.

1931 – 1936 – In 1931, construction began on the Boulder Dam (today’s Hoover Dam), drawing thousands of workers to the area. Nevada state legislature legalized gambling the same year, after realizing that it had become profitable for local businesses. By that time, Las Vegas already had a well-established illegal gambling industry, and was perfectly positioned to begin its rise as the gaming capital of the world. Casinos, like the Las Vegas Club and the Apache Hotel, and showgirl venues began opening on Fremont Street to attract the project’s workers. When the dam was completed in 1936, cheap hydroelectricity began powering the flashing signs of Fremont’s “Glitter Gulch.”

The Strip, The Mob, and The Glamour

1940 – 1946 – Beginning in the 1940s, visitors flocked to Las Vegas for  luxury and excitement. The El Rancho Vegas resort opened on a section of U.S. 91 in 1941 and other hotel-casinos quickly followed. The section of highway became known as “the Strip.”

1947 – 1954 – By 1954, over 8 million people were traveling to Las Vegas, pumping $200 million into the economy. Gambling was no longer the main attraction and megastars like Frank Sinatra, Dean Martin, Liberace, and Elvis Presley started performing. After visitors saw the stars, they would explore the rest of what Las Vegas has to offer, including great food, a bustling downtown, and more.

1980s – Present – We are living in the growth era of Las Vegas. Although the city dates back to the 17th century and earlier, it’s actually relatively new compared to other big cities. For example, Los Angeles’ growth boomed around 1870, and New York City and many of the cities on the East Coast have been drawing residents since the 1700s!

Even though Las Vegas is a young city, its growth has propelled at an exponential rate, and we are only getting stronger as a city. Every year, we introduce new businesses, restaurants, art opportunities, and sports teams. We don’t think any other city has welcomed an NHL team, an NFL team and built a brand new stadium in the course of a few years!

One of the reasons  Las Vegas has such a rich culture today is because of its varied past. Between major construction, economic development, and first-class entertainers, it’s no wonder why both tourists and locals love this indulgent city.