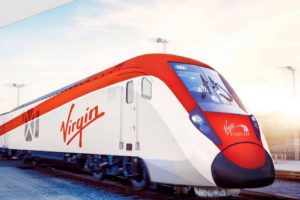 The proposed station that Virgin Trains Las Vegas will call home would span more than 273,000 square feet on land near the South Premium Outlets mall, according to documents submitted to Clark County.

Located off Las Vegas Boulevard between El Dorado Lane and Robindale Road, the Southern Nevada base for the proposed $4.8 billion high-speed rail link with Southern California would stand two stories tall, with a seven story-tall parking garage also slated for a portion of 110 acres of land, according to the plans.

The first floor of the terminal would include a self-ticketing area, departure lobby, retail space, baggage claim and office space. Plans call for the second floor to include retail and office space, passenger waiting areas and security. Outdoor drinking and dining possibilities were also noted in the plans.

The first floor of the parking terminal includes dedicated travel lanes for taxi and ride-hailing pickups and a separate turnout area for shuttle bus pickup.

The parking garage would connect to the train terminal via a 138-foot-long pedestrian walkway. There are 2,680 parking spaces planned for the train station.

Plans call for the curbside arrival and departure area to be located off El Dorado Lane, with access points also off Robindale.

With the station taking up only 14 of the 110 acres, future development is slated to follow.

“While the company hasn’t expanded on the plans beyond the station, we have 100 acres and we certainly will look to develop it over time in a way that would further the transportation business,” a Virgin Trains representative said.

Virgin Trains hails the project as an enhancement to Las Vegas by providing easier access to California, while promoting economic stimulus by providing thousands of jobs and opportunities in the area.

The Las Vegas station would send riders 170 miles to a planned Victor Valley station slated to be built off I-15 near Victorville, California. A maintenance facility would also be located in the Victor Valley.

Construction on the project is scheduled to begin later this year, with operations planned to begin in 2023.

All plans are reliant upon tax-exempt, private activity bonds being approved for the project by Nevada and California officials. Both states are waiting for the Federal Railroad Administration to guarantee them no additional environmental impact work would be required for the project, which was first approved as XpressWest in 2011. The project’s plans were adjusted last year when Virgin Trains came into the fold, causing an additional review before the “record of decision” is provided by the railroad administration.